Below is a story that was written about the North Saint Paul High School DECA group for the Magic Carpet Disney Magazine. Every year, we help arrange the air travel for DECA Advisor Mary Mielzarek and her students down to Disneyworld for their educational  workshops.

Treats for the Tastebuds

Disney dazzles its guests with a wide array of food options 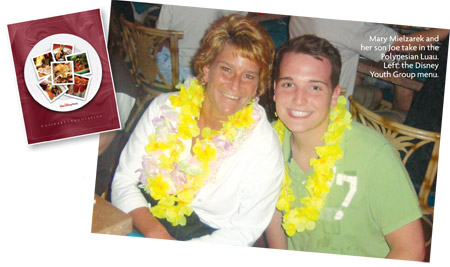 If you're coming to the Walt Disney World Resort to perform with your band or take part in an educational workshop, chances are that food isn't the first thing on your mind. But the truth is that everybody's gotta eat, and after you've experienced what Disney has to offer, it's more than likely that you'll be a lot more interested in eating.

Every year for the past seven years, Mary Mielzarek, a marketing teacher at North High School in North St. Paul, Minn., has traveled to Disney with her students. For the past three years, she's brought them to the Fantasmic! nighttime show at Disney's Hollywood Studios, where she's taken advantage of the special Italian buffet that groups can order in advance. "The dinner and the show are the students' favorite part of the trip," she reports. "This year it was on the last night of our stay and it was a fabulous way to wrap up the trip. The food is fantastic. I especially liked the antipasti salad."

Mielzarek and her students are also fans of the fare at Disney's Polynesian. "The students had breakfast there every morning," she says. "They had a $10 maximum to spend per day. Most of them couldn't spend it all. A great value!"

John Mastroianni, director of bands at Hall High School in West Hartford, Conn., shares Mielzarek's fondness for the Fantasmic! dinner, but he's even more enthusiastic about the special Disney Youth Theme Park Breakfasts, which take place in a different park every day—before the park opens to the public. "The kids get first dibs on the rides, which is great," Mastroianni says, "and you get to eat in these neat places like the backstage prop shop at Disney's Hollywood Studios. But the meal itself is unbelievable: scrambled eggs, potatoes, sausage. We've done the breakfasts twice now, and I'd do them again in a minute."

Time to Travel is proud to bring you Disney Cruises & Vacations